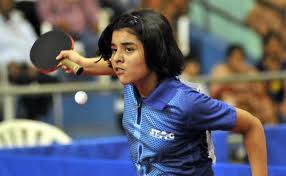 Jodhpur, September 27: On a day when women's top-seed Poulomi Ghatak, No. 6 Mouma Das and men's No. 2 seed Soumyadeep Roy made their exit from the ongoing National Ranking (Central Zone) Table Tennis Championships at the Gaushala Indoor Hall, two new champions emerged in the Junior Boys and Girls singles here today.

In the Boys singles, it was Delhi's Utkarsh Gupta, who won his maiden title in the junior section, beating Abhishek Yadav of PSPB 4-1, while K

Reeth, Manika bow out of contest in Youth section


Jodhpur, September 26: Two seeded girls in the Youth section-No. 5 Reeth Rishya of PSPB and No. 4 Manika Batra, also of PSPB-fell by the wayside while No. 5 seed Senhora D'souza from Maharashtra and Narasimha Priya from PSPB, who is seeded in the Junior but not in Youth section, went down without much of a fight in the Junior girls event of the National Ranking (Central Zone) Table Tennis Championships at the Goushala Indoor Hall here today.

Walkovers a concern for all


Jodhpur, September 25: Even as qualifiers struggled to find their feet in the junior boys and girls sections, respectively, 32 boys and 24 girls made the cut to qualify for the main draw of the at the National Ranking (Central Zone) Table Tennis Championships at the Gaushala Indoor Hall here today.

They will now get a chance to rub shoulders with the top-ranked players, but what surprised everyone were the many walkovers in both the sections. They were,


Jodhpur, September 24: It was a long-awaited contest between the two Petroleum Academy boys pursuing different styles. In the end, it was the offensive Birdie Boro who won beat the defensive Lalrinpuia 4-2.to wear the sub-junior boys’ singles crown in the National Ranking (Central Zone) Table Tennis Championships at the Gaushala Indo