New Delhi, July 22: Sudhanshu Groverdefeated Abhishek Yadav 4-3 to emerge the Junior Boys singles champion while it was another new face, Suthirtha Mukherjee who won the Junior Girls singles crown beating the experienced Manika Batra 4-2 to win the Junior Girls crown on the concluding day of the South Asian Junior Table Tennis Championships at the IG Stadium here on Monday.

Indian Paddlers on a Gold Rush


New Delhi, July 21: Indian paddlers completed the formality in a way they were expected to claim all the four team gold medals on the second day of the South Asian Junior Table Tennis Championships at the IG Stadium here on Sunday.

Sri Lanka finished behind them to win the four silver medals, while the bronze medals were shared by Bangladesh, Nepal and Pakistan. Bhutan remained the only country not to finish among medals in the team events.


New Delhi, July 20: The Indian teams did not have even a semblance of resistance from any quarter as their boys and girls in the Junior and Cadet sections went through the motion on the opening day of the South Asian Junior Table Tennis Championships, being played at the Indira Gandhi Indoor Stadium here today, which

The Cadet and Junior Boys events, which are played in two stages, saw the Indians taking their respective top slots to move into Stage II. As for the girls


New Delhi, July 19: Indian paddlers start favourites yet again to make another clean sweep of all the 10 gold medals on offer when they start their campaign in the South Asian Junior Table Tennis Championships that get underway at the Indira Gandhi Indoor Stadium here from tomorrow.

In the last edition held at Shillong, the Indians not only won the gold in team and individual events of all the four sections-Cadet Boys, Junior Boys, Cadet Girls and Junior Girls-bu 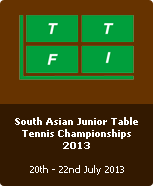