SILIGURI, October 29: Manav Thakkar from the PSPB Academy and Andhra Pradesh’s Naina were crowned in the Sub-Junior Boys and Girls sections, respectively, at the National Ranking (East Zone) Table Tennis Championships which concluded at the Municipal Stadium here today.

Top-seed Thakkar beat his West Bengal rival Ronit Bhanja 4-1, while No. 3 seed Naina upset No. 1 Moumita Dutta, also from West Bengal, 4-3 to see that no paddler from the zone claimed the tw

Tough day in office for qualifiers


SILIGURI, October 28: Top eight players, who were given direct entry into the main draw, based on their current rankings, in the Sub-Junior Boys and Girls sections, respectively, were joined by the group leaders as the qualification phase in the National Ranking (East Zone) Table Tennis Championships ended here at the Municipal Stadium today.

After three rounds of qualification matches since morning, 24 boys and 20 girls who got to join th 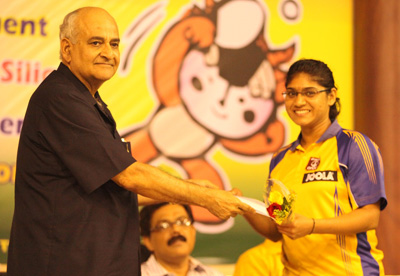 Amal Raj was simply superb with his excellent service variations and fast backhand flicks, which rendered Ghosh a pedestrian this evening. In fact,

While all that happened in the quarterfinals, unseeded Mouma Das showed the tenacity to beat No. 2 Pooja Sahesrabudhe 4-3 in the first semi-final late this evening. She will meet in the


SILIGURI, October 25: All the top women seeds set the ball in motion by entering the next round at the National Ranking (East Zone) Table Tennis Championships at the Municipal Stadium here today. As expected, the qualifiers had to suffer the brunt of their fancied opponents in the main draw of the women's singles, falling by the wayside in one-sided first round matches.

On a very pleasant day here, none of the qualifiers had the gumption to put up any n