Ghosh took home Rs. 2 lakh and Mouma, who was taking on Poulami for the fourth time since their first final appearance in 1998

No. 2 seed Devesh Karia of Gujarat, who had a wonderful outing this season, lost to qualifier Raj Mondal from West Bengal who beat him 4-1.


Pudhucherry, January 15: Petroleum Sports Promotion Board’s G. Sathiyan has been given the pride of place when men’s singles seeding list was finalized for the 76th Senior Nationals, being conducted here at the Rajiv Gandhi Indoor Stadium here today.

Gujarat’s Devesh Karia occupies the No. 2 position on the list with reigning national champion, Sanil Shetty, pushed to the No. 3 spot. Even more pathetic was the case of runner-up Ha


Pudhucherry, January 14: The Petroleum Sports Promotion Board (PSPB) extended their reigns for yet another year as their men lifted the Barna Ballack Cup and their women the Jayalakshmi Cup in the 76th Senior Nationals at the Rajiv Gandhi Indoor Stadium here today. In both the team finals, PSPB had a common opponent in West Bengal with identical 3-0 verdicts. 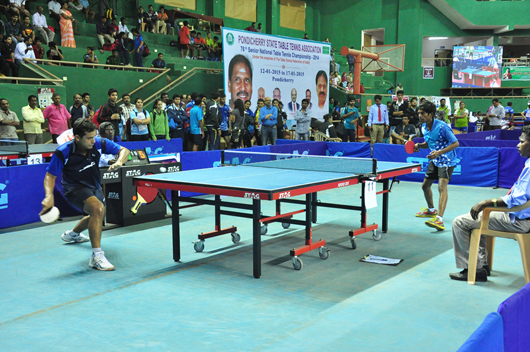 But the spotlights fell on both Haryana men, who beat Maharashtra ‘A’ 3-1 and Airports Authority of India (AAI) women who downed Tamil Nadu 3-1.