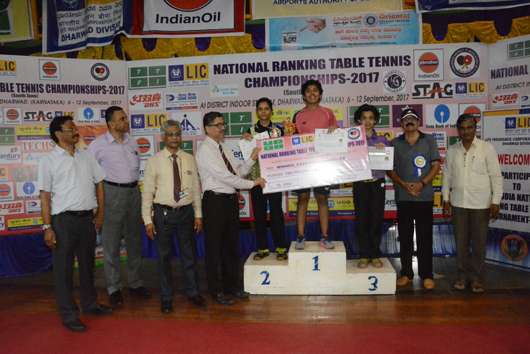 Dharwad, September 12: A great achievement, indeed, for Nithyashree Mani of Chennai Achievers. Rising like a phoenix, she dumped Munmun Kundu 4-3 to lift her first Sub-Junior Girls trophy, even as Payas Jain failed to defend the Boys title he won at Indore, going down to H. Jeho of Petroleum Sports Promotion Board Academy 4-3 in the LIC-IOC All India National Ranking Table Tennis Championships (South Zone) at the District Indoor Stadium on the concluding day here today. 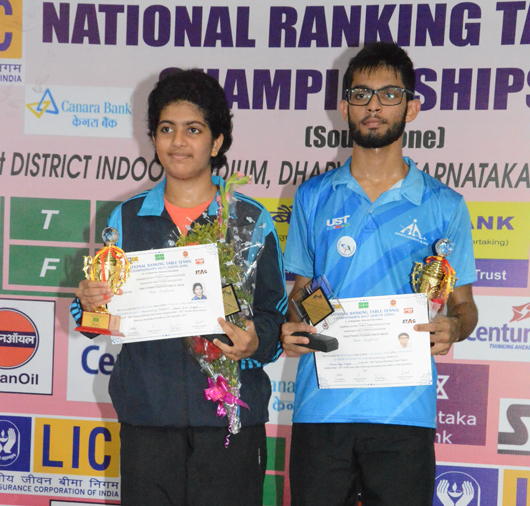 Dharwad, September 11: Manush Shah of the Airports Authority of India added yet another title, this time in the Junior Boys category, to his already overflowing cupboard when he downed Jeet Chandra of West Bengal 4-1 while Swastika Ghosh of Maharashtra outplayed Selenadeepthi Selvakumar, also of AAI, to score a similar victory and claim her maiden Junior Girls crown in the LIC-IOC All India National Ranking Table Tennis Championships (South Zone) at the District Indoor Stadiu 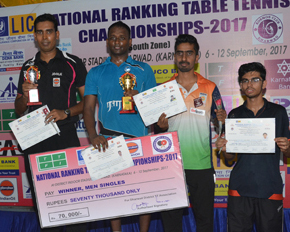 The trophy-triumph earned him Rs. 70,000 in prize purse and, more importantly, did a world of go

Sharath creeps into semis; Madhurika survives as Archana rolls past Takeme into last 4 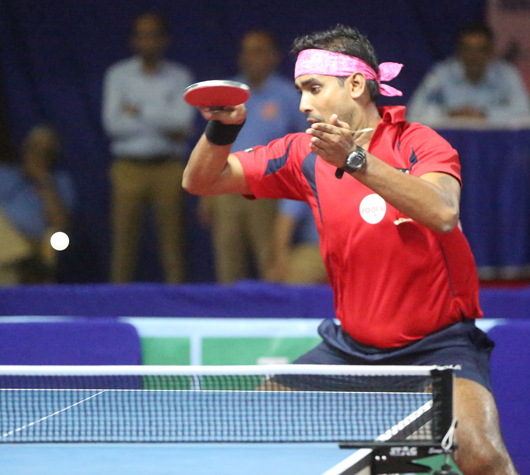 Dharwad, September 9: Top-seed A.Sharath Kamal crept his way into the semi-finals of the LIC-IOC All India National Ranking Table Tennis Championships (South Zone) when he beat a sturdy Sougata Sarkar of LIC 4-3 at the District Indoor Stadium here today.

Second-seed G.Sathiyan brushed aside left-hander Sail Shetty’s challenge, winning his match 4-2, while Manav Thakkar and A. Amalraj eased into the next round without a sweat on a sultry evening. 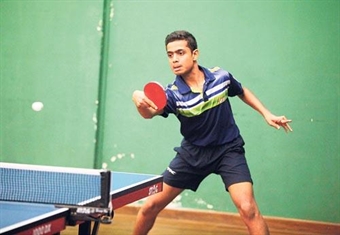 Dharwad, September 8: On a day that saw a couple of men seeds falling by the wayside, No. 3 Harmeet Desai, who will be playing his first Asian Cup in a week’s time at Ahmedabad, must be the most disappointed.